For a Hofstra professor currently teaching English 60, “Constructing British Literature,” Thursday’s vote on a referendum on Scottish Independence from the United Kingdom is an exciting event that reinforces many of the points I make for my (usually) American students about the status of “The United Kingdom” and its relationship to “Britain”––in particular, it reminds us that these are political designations as much as geographical ones, and that these terms we use in class to describe geographical regions are not stable terms. The Referendum also helps make clear that the shifting relationships we see in our investigation of literature from England, Wales, Scotland, and Ireland in the period the course covers (rather improbably, about 800 to 1798) continue to shift even now.

As a scholar who has studied the relationship between Scotland and England for more than a decade in my research, I find the news about the Referendum interesting for reasons that extend beyond the classroom. Over the past ten years, I’ve written about Anglo-Scottish relations in a variety of contexts, though primarily my interests center on how they are represented in 16th- and 17th century works composed for dramatic performance. For instance, examining plays like Shakespeare’s Macbeth (1605) and 1 Henry IV (1596) and Henry V (1599), I’ve noted that the playwright’s Scotsmen are almost exclusively soldiers, and that Shakespeare identifies these men as powerful martialists with changeable loyalties––an instability rooted in Scotland’s military traditions and in what English writers saw as a mercenary culture that could not be trusted. I’ve also written about an amateur playwright, parliamentarian, and horse-racing enthusiast, John Newdigate, who removed the character of a Scottish jockey from one of his plays as tension between the English and the Scots mounted in the 1630s over Charles I’s imposition of an Anglican prayerbook in the Scottish church. The two versions of Newdigate’s play that we’ve found show that even a private citizen might feel pressure to censor himself in creating entertainment for his friends and family, excising from the later version of the play all references to “the North” as well as the joking jockey with a distinct Northern or Scottish dialect. 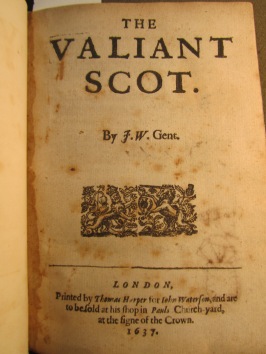 I’ve also written about another play called The Valiant Scot (composed in the 1620s), which features the Scottish “freedom fighter” William Wallace and depicts his rebellion against the English monarch who took the throne in 12th Century Scotland by way of military force. This play, a seventeenth-century analog to the American film Braveheart, takes up the issue of union and broken alliances in explicit fashion, encouraging audiences to consider the political status of both countries from its very first scene. In its opening, we see English noblemen boast about their new status as “rulers over Scotland” (1.1.2-3); one observes, “they are a Nation / Haughty and full of spleen, and must be manag’d /With straighter reins and rougher bitts.” (1.1.6-10).

Another disagrees; “I find them easie, tractable and mild,” he asserts, and insists that “Authority may with a slender twine / Hold in the strongest head” (1.1.11-17)

For contemporary English audiences of The Valiant Scot, this discussion on the proper governance of conquered kingdoms was not just the theoretical stuff of Machiavelli, whose chapter “On Cruelty and Mercy” in The Prince contemplated whether it was better for rulers to be loved or feared. More than a specific example employed to advance a general principle of governance, this scene was an episode of their own nation’s history: in representing the hostile joining of two kingdoms by way of military conquest, the play was, portraying a historical contrast that implicitly celebrated the far more congenial joining of England and Scotland achieved by the accession of James I in 1604 and anticipated its rocky continuance and future military conflicts in the 1630s under his son, Charles I.

Much of the play focuses on the rebellion to English rule organized by William Wallace and it tracks the shifting allegiance of former claimant to the throne, Robert Le Bruce as well. Wallace vows to “hew the yoke from off [his] countries necke” (2.1.39) and “winne Bruce from the English” (4.3.72); through Wallace’s example, Bruce renounces his ties to the English Monarch, and, at the play’s exciting climax, he declares,

Dear Scotland, I no more will be a goad,
Pricking thy sides, but if ere I draw a sword,
It shall be double-edg’d with bloud and fire,
To burn and drown this Kingdome and this King.
(5.1.15-23) 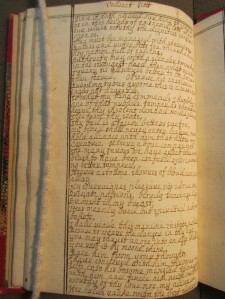 Portions of The Valiant Scot are copied into a Commonplace Book owned by William How in the 17th Century. Photograph taken by Vimala C. Pasupathi from the Folger Shakespeare Library, V.a.87.

This play certainly would have resonated with playgoers who knew the history of military conflicts between England and Scotland under Edward I as well as later conflicts under the Protector Sommerset in the reign of Edward VI. By 1637, when the play was printed and sold at book shops and copied into private commonplace books like the one on the left, the play’s depiction of Anglo-Scottish relations would have evoked the current climate of Scottish dissatisfaction with King Charles’s attempt to make Scottish religious practice more like that in the Anglican Church. Riots and public demonstrations ensued in Scotland from the moment the English prayer book was read aloud in Scotland’s St. Giles Cathedral that year; these riots were followed by a massive, and more unified petitioning effort than had been undertaken previously, culminating in the drafting of the Scottish National Covenant in 1638 and Charles I’s declaration of war against Scotland for its inhabitants’ resistance in the following year.

To be sure, my research does not give me full insight into the current Referendum, nor does it make me feel equipped to offer commentary on what should happen with the vote; that matter, of course, is best left up to those who are allowed to vote and those who will be most immediately affected by it. And certainly, the relationship between the two has changed quite a bit since the late 1630s and since their more official union in 1707, a point in time at which my scholarly expertise ends. But my research does make clear to me the value of having a nuanced sense of history and the difficulties of defining and maintaining national communities over time. As I noted in my most recent work on The Valiant Scot (published here), its subject matter is as timely as ever, and no matter what position Scottish voters take on Thursday, Scotland’s thriving theatre culture would do well to put this old play to new performance.

Where to Find Us